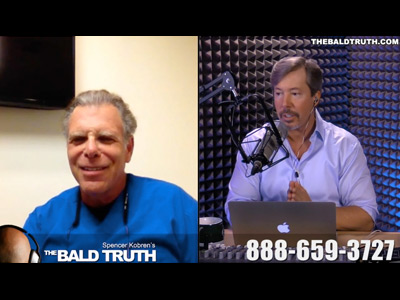 At the Hair Transplant Institute of Miami, we never stop researching, developing, and refining our methods of hair transplant surgery. We continually strive to improve the comfort, safety, and natural aesthetics of each procedure that is performed at our clinic. It is our pleasure to introduce our newest achievement in hair transplant surgery: The Mosaic® Hair Restoration, a novel approach that ensures a unique follicular pattern so each patient receives the most natural end result.

Is Mosaic™ Hair Restoration the Next Logical Step?

Is Mosaic Hair Restoration The Next Logical Step? Paul Rose., M.D., J.D. from Spencer Kobren’s The Bald Truth on Vimeo.

Dr. Rose: The Mosaic™ idea came out of the fact that I noticed over time, when I would go to many other physicians’ offices to see how they operated, that a lot of people would think of the recipient area as being divided up into zones. And they would do single hairs, the would do 2 hairs, 3 hairs, and each one of them would have a separate zone.

But when one looks at a picture of the donor area, and you look at the way hairs are set up, it’s obvious to you that hairs are set up in a mosaic type of pattern. The 1’s are mixed with the 2’s and the 3’s. That is the way Mother Nature does it, so it seemed to me that if you could replicate that on the patient, and do that in the recipient area, you would wind up with a more natural approach.

So with that, and taking into consideration that you do want to have a lot of single hairs at the very fringe– the very front– we developed a computer algorithm based on video images of the donor area. We did that in conjunction with Florida International University, and we were able to acquire a patent on this methodology.

Spencer Kobren: Well, you know what I find interesting– obviously, everyone is kind of set in their ways. You’ve been doing this for a long time, and you know I have to say you are one of the unsung heroes of this industry. I think it’s important for people to know that. I don’t think you’ve ever called the program, you don’t take the time to try to put yourself out there online that much, you’re not presenting a lot of your images– you’re just doing your thing. And you’ve been doing your thing well, and better than most people, in my opinion, ever since I’ve entered this industry. You were listed in the first The Bald Truth. And that was a time when there was no fee to be a part of the ISHRS. The ISHRS wasn’t even a part of my thinking at the time. It was just, I wanted to create a list of physicians who were really doing, in my view, state-of-the-art surgical hair restoration at that time. And sadly, there were only 11 of you guys. And you were one of them. But I think that, when I see these peoples’ short lists online and I don’t see your name on there, I think to myself ‘That’s insanity,’ because you really helped to start it all, and you really do it the right way. So I wanted to give you your props, I think it’s really it’s really important, and I’m excited that you have come up with this new concept because people are lazy. They are doing things the same way, year after year, just because they want to take the path of least resistance.

Dr. Rose: Well, I think to a certain extent that’s true. Thank you very much for the compliments, it’s great to have your support. You know, I was very privileged to be a part of that initial group of doctors that you cited. It’s great company to be in the company of people like Bill Rassmen and Bob Bernstein and Ron Shapiro, Bobby Limmer. We were fortunate to develop the follicular unit idea, and I would say I’ve never really been one for self promotion, for whatever reason. I don’t think there’s anything wrong with people who do self promote, but I really haven’t been active in that. I’ve had a great realization throughout my life that you never know everything. Even when you think you know it, you don’t. So I’ve always tried to come up with ways to learn more.

For more information on our clinic, physicians, and treatment options, readers are invited to contact us online or call our clinic directly at 305-925-0222.