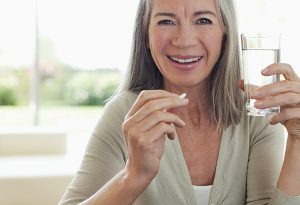 Men and women are different in many ways, including why and how they can suffer from hair loss. Similarly, there are hair loss medications which may work for men but won’t work – and can even be harmful to – women, Propecia most notably. But there is also a medication which has increasingly shown promise as a treatment exclusively for women who suffer from a hair loss condition called androgenetic alopecia.

Spironolactone (Aldactone or CaroSpir) is a drug approved by the FDA to treat fluid retention caused by a range of conditions such as Iiver disease and kidney disease. As with many medications, spironolactone is also used to treat other conditions beyond its approved use, including the treatment of high blood pressure, heart failure, and hyperaldosteronism.

In recent years, female pattern hair loss has been added to this list of “off-label” uses for spironolactone. Typically, it is only prescribed when other medications or treatments don’t work on a patient.

What is Spironolactone and How Does It Treat Female Hair Loss?

Spironolactone is a part of a family of medications called aldosterone receptor antagonist. The “antagonist” part relates to the medication’s effectiveness at slowing down and reducing the body’s the production of androgens. These male sex hormones, also found in women, are associated with hair loss caused by androgenetic alopecia. Reducing androgen levels can put the brakes on the progression of hair loss and even can encourage hair regrowth.

Will Spironolactone Work For You?

If you’re a guy, spironolactone simply won’t work for you. It also won’t be effective for women whose hair loss is not hormone-related, such as hair loss caused by stress, chemotherapy, or nutritional deficiencies.

But for female pattern baldness, the drug’s effectiveness has been demonstrated in multiple studies, including one in 2015 which found that 75 percent of the study’s participants with androgenetic alopecia saw a noticeable improvement in their hair loss after taking spironolactone. Another study from 2017 reported that a combination of spironolactone and minoxidil could reduce hair shedding, increase hair growth, and improve hair thickness.

One thing spironolactone is not is quick. Most women need to take it for at least six months before seeing results while some may not notice any improvement for a year.

As with all prescription hair loss medications, spironolactone comes with a number of potential side effects, including low blood pressure, drowsiness, nausea, headaches, dizziness, weight gain, or irregular periods, among others.

Whether spironolactone is right for you depends on the nature of your hair loss, your overall health, and other medications you may be taking. Scheduling a hair loss consultation with a hair transplant physician is the best way to find out what course of treatment will deliver optimal results for treating your hair loss.

If you’re a woman troubled by hair loss, please contact the Hair Transplant Institute of Miami online or call our office directly at 305-925-0222 to receive a personalized evaluation and treatment plan.